My friend Travis  (http://shoestringrestoration.com/) sent me an email one day to say he left some wood that he thought was wormy chestnut on my front porch.

He told me that, “It was a little bit rough and was odd and ends and if I didn’t want it, he would come by and pick it up”.  Wormy chestnut?  No problem, I will take what ever you have.

I wanted to build a machinist’s work chest but just didn’t have enough salvaged lumber to complete the project so I just laid out the lumber I had and worked out a plan to maximize the material.  I was able to plane the mismatched wood, remove the burn and rot and end up with enough board-feet to complete a 20″x18x11″ work box.

I still have enough scraps left to build a tray for the inside and hope to get to it sooner than later. 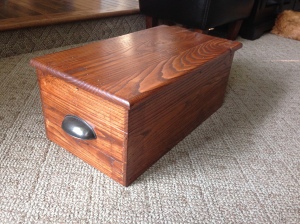 It was great to make the most of some lumber that is becoming harder and harder to find.   (to be continued)…..